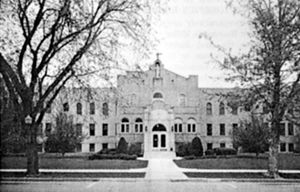 The front entrance to the original St. Joseph Hospital, photo taken in the 1930s.

Not so long ago (but then again, it was), the health industry in the United States was dominated by hospitals run by religious organizations and charities, most of them Catholic Sisters belonging to various orders. It was a calling many nuns answered with their faith, a faith that inspired a strong dedication to provide comfort to the sick and injured. So it was across a nation. So it was in Box Butte County.

In 1910, Drs. H. A. Copsey and C.E. Slagle approached the Rev. W. L. McNamara, pastor of Holy Rosary Church, asking help in building a hospital for the community. Within a year, their efforts resulted in a two-story brick building housing 23 beds. The hospital was staffed by the Sisters of Mercy from Omaha for a brief period, before they bowed out due to financial difficulties.  Their departure resulted in Fr. McNamara turning to the Sisters of Saint Francis of Penance and Christian Charity. The Sisters were already a presence in the community, opening St. Agnes Academy in 1908. They responded to Fr. McNamara’s pleas in their usual humility, agreeing to help run the hospital, effective May 1, 1911, beginning what would eventually be six decades of service to Alliance, Hemingford and rural Box Butte County communities.

Under their guidance and the expertise of the medical community, St. Joseph was built just five years later, with the Central Wing completed in December of 1916 at a cost of over $20,000. Its completion raised the number of beds to 40.

By the 1920s, St. Joseph’s Hospital became a medical center for the Panhandle, eastern Wyoming and southern South Dakota, resulting in the east wing being built in 1925 and the west wing in 1928. This final configuration of St. Joseph’s Hospital brought the total beds to 100 and it continued to serve the needs of Box Butte County until the 1960s under the guidance of the Sisters of St. Francis.